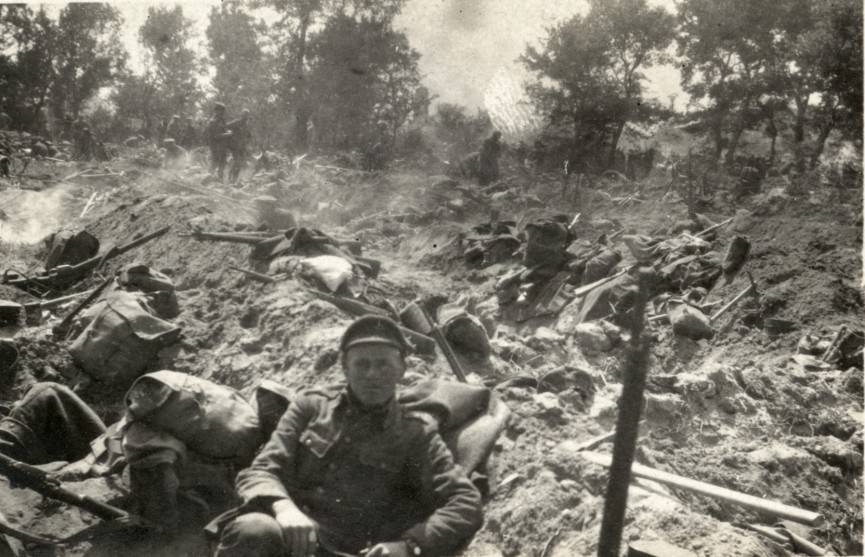 The failure of either side to achieve a victory in 1914 left the combatants facing a long war. On the Western Front, in France and Belgium, armies were immobilized in trench lines. Offensives consistently failed in the face of overwhelming defensive firepower. On the Eastern Front, Germany and Austria-Hungary inflicted defeats on Russia in a war of large-scale manoeuvre, but the Russians sacrificed territory in strategic withdrawals and kept fighting.

Only Serbia was decisively beaten, attacked in overwhelming force by Germany, Austria-Hungary, and Bulgaria. The search for an alternative to the deadlock in the trenches led Britain to initiate an attack on Turkey at the Dardanelles. But when Allied troops, including Australians and New Zealanders, landed at Gallipoli they found themselves bogged down in trench warfare just as frustrating and destructive as that on the Western Front. The entry of Italy into the war on the Allied side opened a new front in which the same stalemate prevailed. The Germans hoped to achieve a decisive breakthrough by the use of poison gas, but this proved indecisive. The war expanded into the air and under the sea. German airships raided London and Paris, and German U-boats attacked Allied merchant shipping, the sinking of the liner Lusitania bringing sharp protests from the US Government.

The combatant countries strove to mobilize their economies and industries for total war and achieve dramatic growth in output of munitions. But more cannon, shells, machine-guns, and bullets translated into higher death tolls at the front. The death toll among civilians also mounted, notably in the expulsion and massacre of Armenians in Turkey and the sufferings of the conquered Serbs in the final months of 1915.

Governments on all sides had to increase production in key industries if they were to sustain mass armies in the field. They largely relied on private business to supply the goods, inducing them to cooperate through government control of raw materials, labour, and contracts. For the Central Powers, Britain’s naval blockade presented a particular problem. By preventing the import of key raw materials, the blockade threatened the ability of German and Austro-Hungarian war industries to continue functioning. The German War Ministry set up a War Materials Department under businessman Walther Rathenau to ensure that industries fulfilling military orders received the necessary supplies. The resources of occupied Belgium and northern France, including coal mines and factories, were fully exploited.

Germany was also fortunate in having strong links between industry and scientific research and the world’s most developed chemicals industry. This facilitated the development of synthetic substitutes for materials that could no longer be imported. Critically, the nitrates required for making high explosives were synthesized through the work of scientist Fritz Haber.

At the opposite extreme from Germany, less industrialised Russia was slow to respond to problems in supplying its army. The setting up of a War Industries committee improved Russia’s supply situation during 1915 – most soldiers had rifles, and guns had shells – but the armies still depended on voluntary contributions organised by zemstvos (Russian provincial governments) for most of their clothing and medical supplies. Britain and France had access to raw materials and industrial imports from across the world, as long as sea lanes could be kept open. Nevertheless, in 1915 their armies suffered from shortages of ammunition and equipment.

In Britain, a scandal over shell shortages, luridly worked up in the press, led to conservative and labour politicians entering a coalition government with the liberals in spring 1915. The liberal politician David Lloyd George was appointed to head a new Ministry of Munitions. His vigorous interventionism achieved a striking increase in output.

All combatant countries were hard-pressed to meet the conflicting labour demands of army, industry, and agriculture. France was soon obliged to transfer skilled workers back from the military front to the factories. By the end of 1915, Britain had abandoned enrolling volunteers indiscriminately, and had launched a national registry to establish which men should be reserved for vital industrial jobs.

The employment of women in traditionally male jobs was essential to war production. Munitions factories took hundreds of thousands of women, who performed dangerous tasks such as filling shells with explosives. Women who had been shop workers or in domestic service now drove buses and trams. Many women also found employment as office workers in the expanding government bureaucracies – Britain’s Ministry of Munitions had a workforce of 650,000by the war’s end. The number of British women employed in commerce and industry increased from 3 million to 5 million during the war. By 1918, women made up more than half of Germany’s industrial workforce.

Money to finance the war effort was found through increased taxes and government borrowing on a massive scale. Patriotic appeals were brought in loans from the public in the form of war bonds. As governments pumped money into their economies to promote industry, they struggled to hold down the consequent inflation.

Some people were definitely better off in the war. Including industrialists who secure lucrative armaments contracts and working-class women who found better paid jobs, while others suffered hardship. In 1915, social solidarity still held, but discontent surfaced in accusations of profiteering by businessmen and demands for fairness in the sharing of sacrifice.

The cost of mass production

The combatant countries achieved extraordinary growth in war production, but at mounting social and financial cost.

The financial cost of the war effort was staggering. In Germany, Britain and France, government expenditure rose around 500 per cent between 1914 and 1917. Devoting vast resources to the war also had an impact on food production, reducing the labour available for farm work and creating shortages of tools, fertilizers and horses.

The Vicious Reality of Trench Warfare

World War I and The Era of Industrial Warfare